The SA distance roller pigeon. Why the name and where did these roller pigeons come from? In this article the story of this breed’s history unfolds, and the reason behind the name SA Distance Roller Pigeon is revealed. 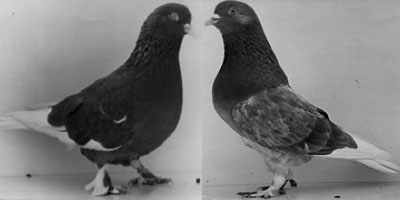 It was purely by choice that the SA distance roller pigeon came to be. The fanciers that imported the Birmingham roller pigeon kept by the British standard and rules of kit performance. These pigeons had to be very active and had to roll as many times as possible during a competition and for this reason the ideal pigeon had to roll only between 1 and 2½ seconds. But some of these imported pigeons had the tendency to roll much deeper than required... Click here to read the full article
Goodrum Birds 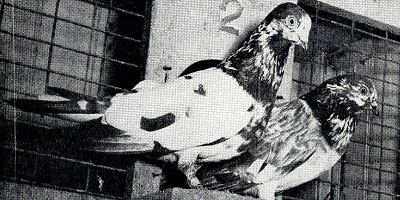 The Goodrum strain most probably originated out of imported pigeons but their country of origin is not known today as it was never recorded. These pigeons were bred by Dr Goodrum who at the time lived in the Eastern Suburbs of Johannesburg. They were medium in build, clean legged pigeons, mostly mottle in colour. They were also known for their ability to roll very deep and were very good flyers.

These pigeons also took some time to become active rollers but not as long as the Kent strain and when they did it was usually a spectacular site to see. It is believed that the Goodrum strain was developed out of the American High-Flying Tippler (Roller), thus giving these pigeons their strong flying ability and their distinct mottle colour... Click here to read the full article
Ketap Birds 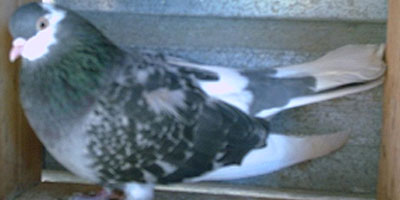 The Ketap strain was bred by Brendan Ketap, also from the East of Johannesburg, and again no records were kept as to where their forefathers came from. These pigeons were small in build, and mostly muffed pigeons with the ability to roll deep. They, however, did not have the strong flying ability the Kent and Goodrum strains possessed, but they were sought after for the one quality that these other two strains lacked, namely activity.

These pigeons became active rollers at a very early age, sometimes only weeks after weaning, and at the same time they were very frequent rollers, sometimes rolling in such succession that it became impossible for them to fly back to the kit and regroup, making them unsuitable for competitions in the purebred form... Click here to read the full article

Reports of dying wild birds, mostly doves, in Buffalo City Municipality were received from Mr. Neville Ganes of 𝗡𝗲𝘃𝗶𝗹𝗹𝗲'𝘀 𝗦𝗻𝗮𝗸𝗲 𝗮𝗻𝗱 𝗥𝗲𝗽𝘁𝗶𝗹𝗲 𝗥𝗲𝘀𝗰𝘂𝗲, who have been collecting dead birds and submitting these to SPCA in Qonce.

As from the end of March 2021, these bird mortalities were experienced in Buffalo City Municipality mainly in Qonce. Furthermore, reports of wild birds dying were received from Mr. Mark Marshall of 𝗦𝗮𝗻𝗱𝘂𝗹𝗮 𝗖𝗼𝗻𝘀𝗲𝗿𝘃𝗮𝘁𝗶𝗼𝗻 in Gqebera.

State Veterinarians did an urgent full scale tracing ,collecting, conducting post mortem exercise to identify the causative agent of wild birds mortalities. These samples were immediately sent to the Onderstepoort Veterinary Research (OVR) Laboratory for analysis. The initial tests were negative for West Nile Virus, Avian Influenza (AI) and Newcastle Disease (NCD). In the meantime, State Veterinary Officials continued with the tracing and sampling of birds for testing.

𝗔𝘃𝗶𝗮𝗻 𝗣𝗮𝗿𝗮𝗺𝘆𝘅𝗼𝘃𝗶𝗿𝘂𝘀 𝗮𝗻𝗱 𝗡𝗲𝘄𝗰𝗮𝘀𝘁𝗹𝗲 𝗱𝗶𝘀𝗲𝗮𝘀𝗲 𝘃𝗶𝗿𝘂𝘀𝗲𝘀.The mortalities of the wild birds is therefore attributed to these viruses. Veterinarians, specializing in birds have found a pattern whereby wild doves seem to be highly susceptible to paramyxovirus in cycles of four years. The cause of the deaths is positively diagnosed as the above viruses.

𝗔𝘃𝗶𝗮𝗻 𝗣𝗮𝗿𝗮𝗺𝘆𝘅𝗼𝘃𝗶𝗿𝘂𝘀 is a viral infection that can spread rapidly, causing high rates of pigeon illness and death and is common in many countries. It is capable of affecting other avian species including poultry but so far, there has not been any positive detection of natural infection of domestic fouls including major broiler farms. Human infection with this virus is rare and may only occur in people in close contact with infected birds, causing flu- like symptoms. Some of the signs of this virus in birds include lethargy, vomiting or regurgitation, green diarrhoea, twisting of the neck, circling, head flicking, laboured breathing, runny eyes and beak. Sick birds can die within three (03) days. Infected birds shed the virus in their faeces and other discharges, contaminating the environment including water, feed, equipment and human clothing. Confirmation of the disease requires laboratory analysis. There is no specific treatment.

In mitigating spread of the disease, bird keepers are advised to implement biosecurity measures and vaccination for their birds.

- Cleaning and disinfecting footwear, washing hands and clothes after visiting other birds.

- Preventing wild birds, feral pigeons, and their droppings from having contact with

your pigeons or contaminating their feed or water.

- Quarantine for at least two weeks any new birds or birds returning from a show or race.

- Limiting any unnecessary visitors to your pigeon’s loft.

𝗡𝗲𝘄𝗰𝗮𝘀𝘁𝗹𝗲 𝗱𝗶𝘀𝗲𝗮𝘀𝗲 is a viral infection of chickens (poultry) and other birds . It is a worldwide problem that causes acute respiratory disease with nervous signs

There are registered Newcastle disease vaccines for poultry that (domestic poultry) owners are advised to use.

Contact between wild birds and domestic poultry must be prevented at all costs.