How and when did the Federation become the official governing body of the South African distance roller pigeon?

Up until 2017 the Federation was called the South African Roller Pigeon Federation when the name was changed to the South African Distance Roller Federation. It was started in the late 1940`s when in 1948 Bill Beckley established the first deep roller society in South Africa and named it Eastern Districts Roller Society (EDRS). This society represented fancier’s nationwide. The first EDRS competitions consisted of 12 bird kits and the duration of these competitions was 45 minutes. During this time a bird could earn one bonus point for grouping and one bonus point for flying. Each bird was also awarded points for its deepest roll within the 45 minute duration of the competition. In those early years the roll of a bird was measured in feet i.e. 1 point for 12 feet, 1.5 points for 18 feet, 2 points for 24 feet, 2.5 points for 30 feet, 3 points for 36 feet, 3.5 points for 42 feet, 4 points for 48 feet, 4.5 points for 54 feet and maximum of 5 points for 60 feet and over. These rules favoured the deep roller pigeon. Each bird was coloured with a different colour dye for identification purposes, and each bird was allocated a judge whose duty it was to concentrate on the bird allocated to him and record each roll of this bird for the duration of the competition.

At its peak, the EDRS had a membership of more than 300 members and this feat has not been achieved in South Africa since. Ironically this achievement eventually led to the disbanding of the EDRS in 1966. One can imagine how cumbersome and time consuming the competitions must have been as each bird had to have a judge watching it for 45 minutes. Fanciers began to break up and form their own smaller localized clubs with competition durations of 20 minutes. Erick Steven broke away in 1968 to form the South African Professional Roller Association, SAPRA. By the end of the 1960`s Tommy Allison, Henry Scott and Bill Beckley left the roller sport never to return.

A notable fancier emerged to take over the reins and reshape the roller sport in South Africa dramatically. Petroon Van Staden, also known today as the “Grandfather” of the local roller pigeon, advocated 1 extra point for grouping and the removal of the maximum of 5 points awarded for a roll of 60 feet or over.

But to do this another method of judging had to be found. Petroon Van Staden formed his Professional Roller Club, PRO, in 1979 and at the same time introduced a revolutionary new method of judging. Instead of using the traditional method of measuring the bird’s depth of roll in feet, Petroon made use of a stop watch to measure the depth of roll, allocating 1 point for every second of roll by the bird. Many of the remaining EDRS members either joined his club or formed clubs with the same principles. These clubs differed from the clubs established a few years earlier because they allocated unlimited points for depth of roll.

Many of these birds would fly in the clouds and start rolling and only stop just before reaching the ground. Such spectacles were not often seen as it took an experienced breeder and many roll-downs to produce safe rollers of this depth. Rollers of this nature normally roll only once in 20 minutes, and have a slower roll action than that of the kit performer but still possess the ability to return to the kit after rolling.

Communication between the clubs began to deteriorate to the extent that each club became unaware of similar clubs in neighbouring towns. Although they all flew according to the same basic principle, each club changed its rules slightly to suite its own needs. These differences in rules greatly reduced the possibility of future reconciliation of clubs into one body with a common purpose and direction. But all was not lost as in the late 1980’s a group of fanciers decided to establish a governing body that was called the South African Roller Pigeon Federation (SARPF). The founding Chairman, Sias Frylinck`s first task for the new founded SARPF and his committee, was to locate all the clubs and their members still flying local rollers pigeons, get them together and discuss a way for everybody to agree on a common set of goals and rules that would be acceptable by all. This was easier said than done, but eventually after hours, days and months of debate, a set of rules based partly on the Van Staden principle was agreed upon. A Constitution was drafted and accepted by all the affiliated clubs which at the time consisted of the Western Districts Roller Club (WDRC), Southern Suburbs Rolling Club (SSRC) and the remaining Eastern Districts Roller Society (EDRS).

In the years that followed, many other clubs joined the SARPF while some also left or were disbanded. The SARPF stopped functioning many times over the years due to unresolved disputes. However, in June of 1998, three clubs, one in the North West Province, Fochville Roller Club (FOCH-RC) and two clubs in the Gauteng Province viz. ‘Elsburg Roller Vereeninging’ (ERV) and ‘Wesrand Roller Duif Vereeniging’ (WRDV) came together and decided to revive the South African Roller Pigeon Federation. Barry Rohland was elected as chairman and 74 active flying members took part in competitions based on the original rules and constitution of the SARPF. In 2000 Carel Laufs was elected as the new Chairman of the SARPF, and like Petroon van Staden, he saw the need for the local roller sport to grow in South Africa but, to do that, disputes left unresolved had to be addressed and resolved. He suggested that each affiliated club nominate a club representative and then joined by his Club Chairman would be invited to meetings with the Executive Committee of the SARPF to resolve disputes. This method turned out to be very effective and successful.

In the months that followed, many such meetings took place and eventually by the end of 2000 a set of rules that everybody accepted was agreed upon, a new Constitution in both Afrikaans and English was drafted and accepted by all. A new Logo and score sheet was also designed for the SARPF.

In 2002 a Newsletter called THE ROLLER PIGEON was first introduced to the members and was chosen as the official mouthpiece of the SARPF. Minutes of meetings, competition results and articles sent in by members to the Editor were published in THE ROLLER PIGEON each month. 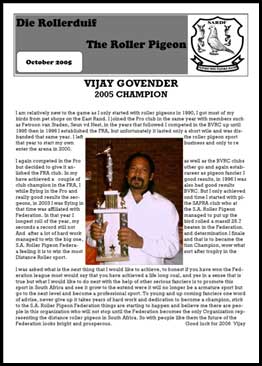 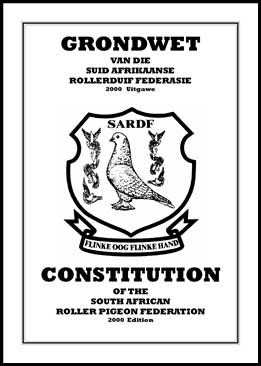 Examples of the Newsletter THE ROLLER PIGEON left and the South African Roller Pigeon Federation CONSTITUTION on the right. 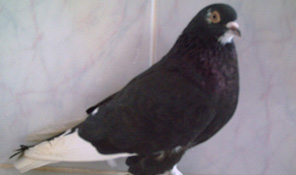 The pigeon WRDV 597/1997 that was selected to represent the Standard of the SA Distance Roller Pigeon.

Carel Laufs continued as the Chairman of the SARDF until the end of 2010 when he took a decision to step down with the hope that someone new with fresh ideas would take over and carry on with what he had been doing for the last 11 years and ultimately take the SARPF to the next level. This decision turned out to be a mistake which resulted in the disbanding of the SARPF in early 2011.

As in the past, clubs continued and changed the original set of rules to suit their club. This continued up until the end of 2016 when two fanciers, Johan Drotskie and Wouter Gerber, decided it was time to revive the SARPF. After some investigation they were pointed in the direction of the former Chairman Carel Laufs.

After they had made contact with him and explained their plan, some discussions took place as to where they wanted to go with the Federation. It seemed like history was repeating itself and as in the past, their biggest challenge was to get all the clubs still flying distance rollers together. Most importantly, to get them all to accept one set of rules based on the previous Federation rules. This proved to be the biggest challenge as clubs had been flying their own sets of rules for the past 6 years. Their reluctance to change was understandable. However, in order to revive the federation, it was crucial that everybody agreed on the same principals and rules.

2016 Executive Committee of the Federation 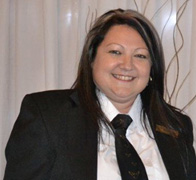 Naomi Murray, the first lady to ever serve on the Federation Executive Committee.

From the onset, the committee made it clear that things had to change if the Federation was to get to where it belongs in the South African pigeon fraternity. During a marathon meeting that lasted 11 hours, big changes were made, the first of which was to change the name of the federation to be in line with the type of pigeon that would compete in competitions. It was then agreed to change the federation name to South African Distance Roller Federation. By doing this the SADRF embodied the South African Roller Pigeon. Many changes followed and the logo was again changed.

The new SADRF logos designed in 2017.

The official launch of the newly founded SA Distance Roller Federation took place on 28 January 2017 during a formal gala ceremony. In the months that follow, more members joined the federation with very few disputes being raised and it seemed that the affiliated clubs had settled in and were content with the rules. 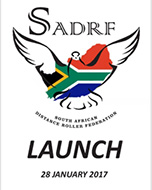 One major change in 2017 came when the federation decided to contact the South African National Pigeon Association (SANPO) who is responsible for ordering and distributing approximately 600 000 rings annually. These rings were mostly ordered by affiliated clubs or unions throughout South Africa. A plea was made to the association requesting that the federation could order rings from them. After the association had made contact with their supplier, an agreement was reached that all federation rings would in future be ordered from the association. This meant that for the first time in the history of the federation, the old aluminum ring was replaced by the modern plastic coated ring similar in design to the racing pigeon ring.

The old SARDF rings (purple) were used up until 2010 and the new SADRF rings (yellow) supplied by SANPO and introduced in 2017.

This partnership with the Association grew to the point where a decision by the federation`s Annual General Meeting in February 2018 was made to affiliate with the association, therefore allowing the federation to get to the next level that it always sought to be. This was the first step to get the federation and the SA Distance Roller Pigeon recognized nationally as well as internationally. So, on 10 March 2018, during the Annual General Meeting of the South African National Pigeon Association held in Bloemfontein in the Free State Province, the application from the federation to become an affiliate of the association was accepted. Another first in the history of the SA Distance Roller Pigeon and the federation in becoming the first roller pigeon institution to form part of SANPO.

In 2018 more clubs joined the federation and the membership more than doubled from the previous year giving an indication that the federation is on the right track to once again represent the SA Distance Roller Pigeon in South Africa. 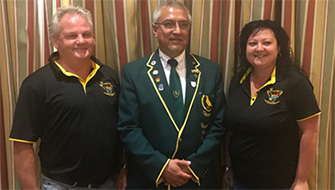 On 10 March 2018 the SADRF was officially accepted as an affiliate of SANPO. On the left is Carel Laufs (SADRF Chairman) in the centre, Fadiel Hendricks (SANPO President) and on the right Naomi Murray (SADRF Secretary).